Leicester City has named Wilfred Ndidi the Young Player of the Season at the club’s award ceremony on Monday.

The Nigerian was instrumental to the resurgence under manager  Craig Shakespeare, featuring 15 times in the Premier League for the Foxes and scoring twice. 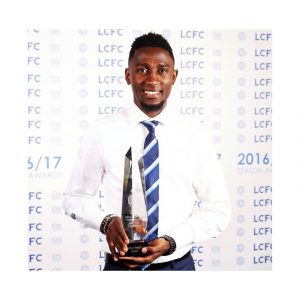 He picked up the prize ahead of England youth internationals, Demarai Gray and Ben Chilwell.

And the Nigeria international was delighted to be rewarded for his exploits.

”I feel really happy and honoured to win this,” Ndidi told LCFC TV.

”I see Demarai Gray and Ben Chilwell as great players beause I never really expected the awad because of the kind of players they are. If they have more chances to play, they could have gotten this.”