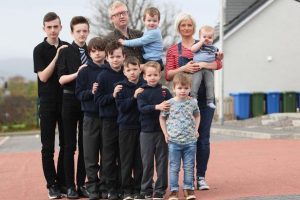 A woman identified as Alexis Brett,is two boys short of having a football team after giving birth to 9 boys as she  is the only female in a five-bedroom house full of testosterone. Amazing Alexis has given birth to a record nine sons in a row and she is eight months pregnant again, with yet another boy.

Alexis, 37, and her husband David, 42, are thought to be the first couple in the UK to have conceived 10 sons in a row. The former nurse is now just one boy short of a football team, but insists she won’t complete the set, as she will be sterilised as soon as she gives birth later this month.

Alexis, from Inverness, in the Scottish Highlands, says: “People always ask if have I been trying for a girl. But I can honestly answer ‘no’. I’m happy with my boys. I wouldn’t have a clue what to do with a girl now.”