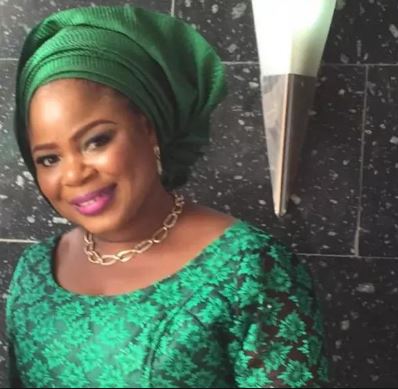 I am the last child and I have three siblings. I attended Saint Argo’s Primary School, Somolu, Lagos, for my primary education and began my secondary education at Igbogbi Girls Secondary School. When my mum passed away, I moved to Oregun High School. Thereafter, I gained admission to the Lagos State University, Ojo, where I earned a bachelor’s degree in Economics.

After school, I wanted to work as an air hostess but my uncle would have none of it. I joined the movie industry in 2002 through one of my aunties and I vividly recall that my first role was in the movie, Ina Abe Aso, which was directed by the late Yinka Ajomo. Since then, I have featured in other movies including Iyawo Oni Gold, Kikelomo Omo Oluso, Okunrin Meta, Owu Iya, Maami, Iro Funfun and many more. My role in the latter movie was one that I really enjoyed because the character that I played  was quite challenging.  I also produced some of these movies such as Kikelomo Omo Oluso, Owu Iya  and Maami in 2009, 2011 and 2012 respectively. I look forward to working with the likes of Genevieve Nnaji, Omotola Jalade-Ekeinde and Rita Dominic.

I have encountered a lot of challenges since I joined Nollywood. Sometimes, you could be invited to audition for a particular role and afterwards, someone else gets to play the same role you auditioned for. At such moments, I become very disappointed and dejected but I quickly move on. However, I have been able to overcome my challenges through humility, hard work and self-respect. These are key elements needed for survival in Nollywood.  If you want to succeed in this industry, take life easy because God certainly knows when everyone will reach the pinnacle of their careers. It may take time, but you will certainly get there.

The first thing that I look out for is the storyline and the message therein. Thereafter, I want to know who the director of the production would be. Then, the cast and crew would be next on my plate. If the storyline does not reach an acceptable standard, I’ll talk to the producer in a bid to make him/her realise that there are some things that I can add or remove from the storyline to make it better. I usually drive home my point in a subtle way. I have rejected several scripts in the past because some people told me that’s the way they want the storyline and refused to see things in a professional way.

There is not much difference between us and our counterparts who act predominantly in the English sector of Nollywood. On a personal note, some of them are quite friendly-Fred Amata, Kate Henshaw, Joke Silva and Olu Jacobs are wonderful people to be with. When you are in their midst, there is no disparity whatsoever and I enjoy being in company with them.

I look up to veteran actresses; Joke Silva, Idowu Philips (Iya Rainbow) and Fausat Balogun (Madam Saje). Over the years, they have remained dedicated to their craft and have showed no signs of slowing down.

I present a lifestyle programme on television called Arakenge, and it was borne out of my desire to do something apart from acting.  I didn’t delve into television presentation because I needed extra income. I have been presenting Arakenge for a year now and the programme is loved by viewers.

Recently, we  lost Yoruba actors; Olumide Bakare and Adesina Adesanya popularly called Pastor Ajidara. We also lost Moji Olaiya, who was delivered of a baby about two months ago. For those who knew her, she was a reserved and easy-going person. For those of us that are still alive, we pray that we will live long.

Combining marriage and motherhood with the demands of acting is not an easy task but with God on my side, I have been able to make the most of both worlds. My son understands that I have to be on movie locations sometimes and I always relate with him like he’s my father. Whenever I am going out, I usually say to him, ‘‘My father, I need to go to work.’’ And he would reply in his childlike innocence, ‘‘Mummy, you are going again?’’ Thereafter, he would urge me to give him whatever he needs before I take my leave. My husband has also been supportive on this journey and I am grateful to him.

I  am not married to a Nollywood practitioner. I believe that marriage is a sacred union as well as a private affair and should remain so if you want to have a happy home. It is not ideal to let the whole world know about your spouse or family. I am a very private person, so I don’t give out  such classified information.

Marriages of celebrities don’t last because couples don’t take out time to understand themselves before getting married. For instance, you cannot marry a celebrity if you are the jealous type. You must be able to deal with the fact that you are married to a celebrity if you want to make the most of your marriage.

When I am not working, you would find me relaxing on my bed. I also love to travel to countries like the United Kingdom, America and once in a while, Dubai just to relax and indulge myself.

As a fashion designer, I design and sew most of my clothes. I love to look simple and classy because the clothes you wear say a lot about your personality. I love ankara, so you would find me using the fabric to sew various styles. I also love shoes, bags and perfumes.

I want to stand out as an actress and remembered as such. I also want to be a role model to others and I can tell you that it’s not a day’s job. I just have to keep working hard, so that I can etch my name in gold.