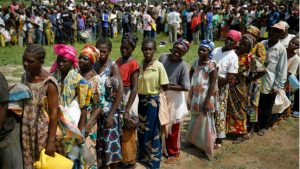 Over 2,080 households among the Internally Displaced Persons (IDPs) in Gombe State are to receive farm inputs under the World Bank’s FADAMA III Additional Financing (AF) Programme.

Malam Yakubu Mohammed, the Communication Officer, FADAMA III AF Programme in Gombe State, made this known in Gombe on Monday.

He said that 600 households in 15 communities across the state were initially selected for the pilot state of the project, which was successful.

The farm inputs will be given to the beneficiaries under the World Bank’s Food Security and Livelihood Emergency Support Project in North East.

“We distributed sheep, goats and chickens as well as food items like beans, rice, groundnut oil and seasoning products to the beneficiaries under the trial phase of the project.

“For the project proper, we will give farm inputs and implements like fertilisers, seeds, herbicides and water pumps to the beneficiaries within the next two weeks.

“The aim is to boost agriculture in the country, in line with the policy of President Muhammadu Buhari’s administration on agriculture,’’ he said.

Mohammed said that some of the IDPs, however, asked for non-agriculture products like sewing and knitting machines.
He also said that the programme would feed the IDPs for two months to enable to them gain strength to farm.

“This is because you cannot take a hungry man to the farm and expect him to perform well,’’ he added.