The Nigerian Association of Shotokan Karate (NASK)  will host the 3rd edition of her ‘Training with the Champions’ International Karate training course with Senseis Andy Sherry (9th Dan) & Frank Brennan (8th Dan) of the Karate Union of Great Britain (KUGB) as event Instructors. 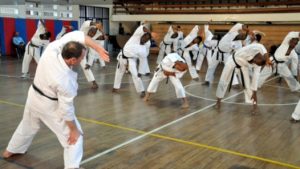 The four-day event which is scheduled to hold in Victoria Island, Lagos from August 29 to September 1, will draw participants from the 36 states of the Federation, the Federal Capital Territory, Ghana and countries of Francophone West Africa.

Shotokan is the most practiced karate style in the world and NASK as one the most respected karate associations in Nigeria prides herself with possessing some of the best competitors and instructors in the country, having fully committed herself to promoting the accelerated development of shotokan karate in Nigeria.

NASK national secretary, John Ogwo, said, “This programme represents one of the association’s flagship events aimed at ensuring that the recent realities of the Nigerian economy do not cause a retardation in karate development as many more karateka participate and benefit from world class training and exposure when we bring in extremely accomplished and highly respected international instructors to train our people locally instead of this being the exclusive preserve of only a privileged few who can still afford to travel abroad on their own funds to essentially seek self-development.

“Senseis Andy Sherry and Frank Brennan are indisputably two of the world’s finest non-Japanese karate instructors. Sensei Andy Sherry is the current chairman of the KUGB and his protege Sensei Frank Brennan holds the world record as the only man to be World karate grand champion for ten consecutive years. Put another way, he was the best karate sportsman in the world for ten consecutive years, winning everything there was to be won at the world level in all the competitive disciplines of the sport (i.e kata and Kumite).”

An exceptional talented athlete, Sensei Frank Brennan epitomized karate excellence when he broke the myth of Japanese invincibility and truncated a long era of Japanese dominance of the sport as he led England to stun and defeat Japan in the 1990 world karate championships in Sunderland.

The expectation of the return of these two world renowned karate exponents has created a palpable excitement in Nigerian karate circles.