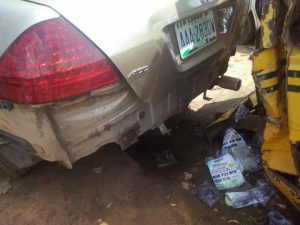 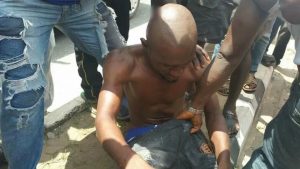 A suspected kidnapper was caught somewhere in Gbagada, Lagos state, after  his attempt to kidnap an eleven month-old baby failed. According to  an eyewitness, the suspected kidnapper was arrested after his attempt to escape failed.
The suspect had targeted a car with an 11-month-old baby and her grandmother after the baby’s mother had parked and gone to buy meat nearby. He was said to have shoved out the grandmother and driven off with the baby in the backseat, after noticing that the car’s engine was left running.
Unfortunately for the kidnapper, a soldier happened to be walking by at the moment and followed in hot pursuit after noticing what he did. The kidnapper ended up causing accidents on the road, while attempting to flee the scene.
Sharing the post, Facebook user, Adebowale Olayinka wrote:
A woman’s car was snatched this afternoon with 11 month old baby inside the car. The woman parked along the road and left the baby and her granny inside the car with the car engine running to buy meat at the road side along Gbagada Lagos, and the kidnapper entered the car and sent the granny down and drove off the car with the baby.
Fortunately a soldier was passing by, immediately he took a bike to run after him, this led to multiple accident on the road and the car stopped working and kidnapper decided to lock himself and the baby inside the car in the middle of express way but area boys came to rescue of the baby.
He was caught and was taken to Pedro Police station at Somolu. Please always be careful of leaving children in a car alone or with anybody, if you are going to buy anything, make sure the car is locked even if the engine is still working. This happened in Gbagada around 12:15pm on the 29th of May 2017 in Lagos. May God continue to protect all Amin amin.
Source: ( Gossip.naij.com)