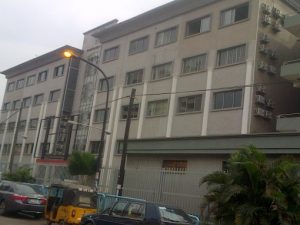 It was an unfortunate incident at the Igbosere Magistrate court, when a 75-year old woman on Thursday afternoon slumped at the first floor after climbing the staircase to the first floor.

The alarm was raised by the chief security officer at the court, Mr. Lateef Bello which attracted his colleagues and other litigants who rushed there to rescue her. The woman passed out urine and started shivering on the ground as the rescuers tried to carry her.

When the victim could not talk or stand on her feet for about one hour, the commissioner for oath at the court, Mrs. O.A Mustapha went to the Lagos High Court on Igbosere Road, Lagos Island to bring a Toyota Hiace bus with the inscription ‘Lagos State Judiciary Probate Registry’ with registration number: EL822LSD to convey her to the Lagos Island General Hospital for treatment

The woman could not be identified as at the time of writing this report as there was nothing on her to identify her.

Sympathizers who spoke about the incident said the victim must have slumped due to exhaustion in climbing the staircase at the court.

They appealed to Governor Akinwunmi Ambode to rehabilitate the two lifts at the court to assist elderly people in accessing the twenty two court rooms at Igbosere Magistrates’ Court Lagos.

According to a litigant, Mrs. Sade Ibukun, who was in tears, “if the two lifts at Igbosere Magistrates Court were functioning, the old woman would not have slumped.”

”Governor Akinwunmi Ambode has done his best in the rehabilitation of Igbosere Magistrates’ Court Lagos in recent times but he should please complete his achievement by rehabilitating the two broken down lifts in the court,” she appealed.