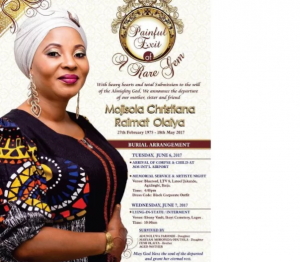 The remains of Late actress Moji Olaiya who passed on on Thursday, May 18, 2017 will be finally laid to rest on Tuesday, June 6. The death of the actress has thrown the Nigerian film industry into a state of mourning as it was a major blow.
The detail of the funeral arrangement was made known by Yomi Fabiyi, her colleague in the movie industry who doubles as a film producer. Moji Olaiya who died two months after having a baby girl would be brought home and buried in the presence of her loved ones. Before the final burial arrangement was made, the burial committee had announced that she would be buried in Ikoyi cemetery.
The committee also made T-Shirts for the burial as they urged Nigerians who want to join the program to get theirs, other Nollywood stars have taken to their social media page to mourn to thespian and pledge their support by being part of the funeral arrangement. Toyin Abraham, Ronke Oshodi and others paid their tribute to the late actress.
Nigeria’s minister of information and culture, Alhaji Lai Mohammed also mourned the beautiful actress while he was in China. Nigerians are relieved that Moji Olaiya’s corpse will be finally brought back from Canada where she died.
AdvertisementABUJA DOCTOR REVEAL THE UNIQUE WAY TO PERMANENTLY CURE WEAK ERECTION, SMALL AND SHAMEFUL MANHOOD AND INFERTILITY ISSUES WITHOUT SIDE-EFFECTS WITHIN SHORT PERIOD!! DON'T BE A VICTIM!! Click Here for More Details