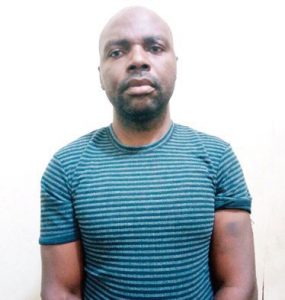 A man identified as Prince Momoh Enema has been arrested for using the name of the Minister of Interior, General Abdulraman Dambazau (rtd), to defraud unsuspecting Nigerians. Enema  was arrested after he and members of his syndicate pretended to be Dambazau, his Chief of Staff and his Personal Assistant.

Enema defrauded the Seriki of Gwandabawa, Sokoto of N1m and again attempted to scoop $10,000. The leader of the syndicate, who is currently on the run, has been identified as Dr. Usman.

According to the Police : “In April 2017, Usman contacted the Seriki, and introduced himself as General Abdulraman Dambazau, Minister of Interior. He told the Seriki that Pres. Buhari had decided to reward the Seriki and his people for their support during the 2015 elections.

The reward would be employment for 20 people from Gwadanbawa into the Nigeria Police Force (NPF) and the Nigerian Customs Service.” Usman instructed the Seriki to forward names and curriculum vitae of the 20 persons.

He also insisted that a sum of N45,000 should be paid on each applicant. He said the money was for training kits. Seriki sent N1m and a date was given, which the applicants would commence training.

Some days later, the minister told the Seriki that the Ministry of Interior was about to issue contract for the supply of equipment to the NPF, Customs Service and other paramilitaries under the ministry.

The contract was pegged at N3billion. Usman asked the Seriki to send him his company’s profile and $10,000 to his bogus Personnel Assistant to ensure he got the contract. This latest demand caused the Seriki to suspect foul play, but played along until Enema was arrested while posing as the minister’s P.A.