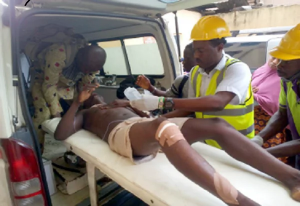 It was all looming and sadness at Adeniran Ogunsanya College of Education (AOCED) in Ijanikin, as four students have been involved in a ghastly motor accident .The students were in their school bus that rammed into a truck along Igando road, as doctors are currently battling to save their lives.
Motorists came out of their respective vehicles to assist in bringing 11 students out of the bus, before the arrival of a Lagos state ambulance. According to an eyewitness, Dele Makanjuola,he said,  “The vehicle in which the students were travelling was on a very high speed. The driver apparently did not see the waste disposal truck on time and when he did, there was nothing he could do to prevent a head-on collision.
“Four of the students were brought out unconscious, while others sustained varying degrees of injuries. They were attended to by officials of LASAMBUS and Lagos State Emergency Management Agency, LASEMA, who were on ground, before they were taken to the hospital.”
According to Vanguard, the incident caused a hitch in the free flow of traffic. Policemen from Igando Division, who visited the scene, directed motorists through alternative routes, until towing vans from the Lagos State Traffic Management Authority, LASTMA, removed the affected vehicles. When contacted, General Manager, LASEMA, Adeshina Tiamiyu, said: “No life was lost. The incident involved a bus conveying students from Adeniran Ogunsanya College of Education, Ijanikin, which rammed into a waste disposal truck due to over-speeding. “However, 11 students, all males, sustained varying degrees of injuries and they were stabilised by the agency’s Emergency Response Team, ERT, and LASAMBUS before subse-quent transfer to Igando/Isolo General Hospital.”
Source: ( Gossip.naij.com)