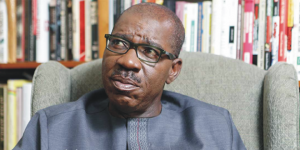 The Edo State government is set to set up a security committee to develop security network to provide adequate security in rural communities and effectively tackle herdsmen attack of farmers in the state.

The Edo Deputy Governor, Mr Philip Shiabu, made this known on Tuesday in Elele, during a condolence visit to the house of the family where a pregnant woman, Mrs Magdalene Tunner, was recently killed in her farm by suspected herdsmen.

Shiabu, while addressing members of the community at the residence of the deceased in Elele, said that government was concerned about the recent killings, which was blamed on suspected Fulani herdsmen.

He called on local communities to be very vigilant and report strange persons to security agencies, while urging community leaders to fish out local collaborators of such dastardly acts for improved security.

The deputy governor said that government was aware of the fear farmers now faced when going for their farming activities, adding the government would not allow insecurity affect the agricultural plan of the state.

He said that the state would reactivate vigilante groups and incorporate them into the security network to effectively police farming communities.

On his part, the Police Area Commander in Edo North, ACP Adamu Isa, said that the police were already working with local vigilante on an operation which started from Ekpere forest to Uziarue community to ensure the vast farming lands were cleared of possible bad elements.

Narrating the sad incidence, the landlord of the deceased, Mr Batholomew Omomo, said that the woman and her husband had been leaving peacefully for years before they were attacked in the farm.

He explained that the pregnant mother of seven children was shot in the stomach and died instantly, while her husband sustained machete cut at the back of his head and was still in the hospital.

Speaking on behalf of the women in the community, Mrs Marry Ifarumhe decried their inability to go to the farm because of the fear of the unknown.