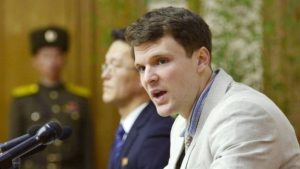 The American student who was released last week in North Korea after being held in captivity for more than 15 months has died, according to a statement released by the family of the deceased.

The student identified as Otto Warmbier, returned to the US last Tuesday, but it emerged he had been in a coma for a year.

North Korea said botulism led to the coma, but a team of US doctors who assessed him dispute this account.

Mr Warmbier was sentenced to 15 years of hard labour for attempting to steal a propaganda sign from a hotel.

He had suffered severe brain damage, and was medically evacuated from North Korea on 13 June to a hospital in his home city of Cincinnati. Ohio. It is unclear how he fell ill.

The Warmbier family has blamed his death on torture they say he suffered in North Korea.

“It is our sad duty to report that our son, Otto Warmbier, has completed his journey home. Surrounded by his loving family, Otto died today at 2:20pm,” a statement from the family said.

It said the student had been “unable to speak, unable to see and unable to react to verbal commands”.

“The awful torturous mistreatment our son received at the hands of the North Koreans ensured that no other outcome was possible beyond the sad one we experienced today.”

President Donald Trump said Mr Warmbier’s death had deepened his administration’s resolve “to prevent such tragedies from befalling innocent people at the hands of regimes that do not respect the rule of law or basic human decency”.

“The United States once again condemns the brutality of the North Korean regime as we mourn its latest victim,” the presidential statement published by BBC added.