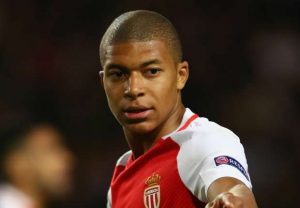 French Giants, Paris Saint-Germain have stepped up their quest to get the signature of  Monaco striker Kylian Mbappe and have made an offer of over €135 million,according to reports.

Mbappe was in fine form last season  when he scored 26 times for the Ligue 1 champions in 44 games, leading to interest from many of the world’s biggest clubs, including Arsenal and Real Madrid.

nitially, PSG were not interested in a mammoth offer for the France international, but since Antero Henrique became their sporting director earlier this month, their priorities have changed. He has even met twice with Mbappe’s father.

The Paris native, who remains very attached to his hometown, sees the Parc des Princes side as the ideal springboard to achieve his dream of playing for Real Madrid, despite all this could choose to remain at the club that gave him his break.

Monaco are well placed financially after selling Bernardo Silva to Manchester City, and with two years left on the youngster’s contract are under no obligation to allow him to leave. Indeed, they are ready to prolong his contract and offer him a huge wage upgrade.