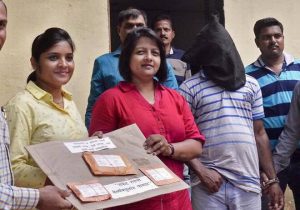 A Nigerian national in Kharghar has been arrested by Anti-Narcotics Cell of the Navi Mumbai policeon Tuesday for being in possession of 178.6 gram of methaqualone worth 8.15 lakh.

The accused, identified as Garry Okafor , was arrested from Sector 34 in Kharghar after Sub Inspector Rani Kale from the Anti-Narcotics Cell received a tip-off.

According to the police, Okafor arrived in India a one year ago on business visa and trading in garments. The police said methaqualone, the drug seized from the accused, was a party drug that cost between 4,000 and 5,000 per gram.

An official from the Anti-Narcotics cell said, “This drug is mostly used by youngsters at parties. We are trying our best to curb the supply of such drugs in the city.

We are trying to find where the accused acquired the drugs from. Usually in such cases, after a case is filed, the source of the drugs is alerted and he goes underground.

We fail to trace his name and hideout and he does not get nabbed.” The police said they are also trying to find out the person who was to receive the drugs from the accused at Kharghar.