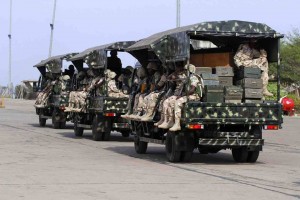 680 members of the Civilian Joint Task Force have died trying to repel Boko Haram terrorist attacks in Borno from 2012 to date, the groups Legal Officer, Mr Junril Gunda, has said.

Gunda said in an interview in Maiduguri on Friday that in spite of the high casualty figure, the JTF remain undaunted in its resolve to protect communities in the state from the terrorists.

“The group which is nonprofitable started in 2012 when our youths picked up sticks and said no more Boko Haram and they successfully push the terrorist group out of Maiduguri.

“We don’t have any other home than Borno, we are therefore working tirelessly to provide civic protections against any form of threat represented by Boko Haram.

“Sadly a lot of our youths have paid the supreme price, there is hardly any day you will hear of an attack without one of our civilian JTF killed and that does not mean we will stop defending our land of terrorism.

“As you can see I am a lawyer by profession, this is my Chamber and I am happy to also be one of the Civilian JTF. I was also trained for eight months on light arms use by the military.

“If I see a Boko Haram now, I can take him down with my gun.

“It was necessary to train our civilian JTF on the use of arms because they always move along with the military in the front line during operations.

“Our civilian JTF had taken part in almost all the operations going on in Sambisa forest.

“It was also necessary because they are always the first to sight Boko Haram suspects during checks in the state capital.

According to him, no fewer than 23,000 youth vigilantes have been registered under the body to provide civic protection in every nooks and cranny of the state.

He said that the job of the Civilian JTF was purely to stop Boko Haram insurgents from causing havoc in the society.

Gunda said there were numerous challenges confronting the group because the members were not been paid for the job.

“Like I said earlier, it was a voluntary thing, so no one was paid any penny for the job and because of some difficulties and poor living conditions of the youths, some engage in begging to fend for themselves.

“It was as the result of this that Borno State Government decided to empower 1,400 of them as vanguards with the acronym BOYES and were being paid N15, 000 monthly.

“Government and other nongovernmental organizations must also give support to the other 20,000 youths who were not empowered.

“They should also give priority attention to widows of our deceased youths because we are left to carter for their welfare.

“Government should sponsor their children and give them a better life in recognition of the selfless sacrifices made by their parents,” said Gunda.