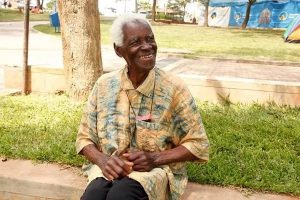 A 90-year-old man in Uganda has completed a 300km pilgrimage on foot. Bernard Tibyangye led a group of Christian faithfuls from his home village of Bushenyi in Mbarara to the Namugongo Uganda Martyrs Shrines, 343km away. They started their pilgrimage on May 10 and arrived in Namugongo on May 24.
In an interview with the Daily Monitor, Tibyangye called the pilgrimage a “walk of faith.”, the  former Catholic catechist added that this was the sixth time he made the pilgrimage. He said: “For me to walk for six years to this place is nothing but a sacrifice just so I can emulate how Christ suffered for our sake, and to learn more about our martyrs.”
Tibyangye added that it was uplifting to make the journey and pray for his family and other people in the process. The group made several stopovers along the way to rest while praying throughout. They will participate in the annual Uganda Martyrs celebration on June 3 before returning by bus on June 5.
Tibyangye thanked God for the good health that enabled him to make such a long trek and added that he plans to make the same pilgrimage next year. The Uganda Martyrs were 23 Anglican and 22 Catholic converts in the Buganda kingdom who were executed in the late 1800s.