The trial of former Benue State governor, Mr Gabriel Suswam, was on Wednesday stalled at the Federal High Court, Abuja, due to absence of the second defendant, Omadachi Oklobia. 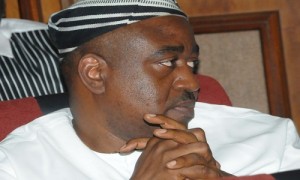 Suswam and Oklobia are standing trial before Justice Ahmed Mohammed on allegations of fraud and money laundering.

The court was informed that Oklobia could not be at Wednesday’s proceeding because he was in Kuje prison on a remand ordered on Monday by another high court in Abuja.

Both defendants are also facing trial before Justice Gabriel Kolawale on a 32-count charge bordering on fraud.

When they appeared before Justice Kolawale on Monday, they were granted bail, but while Suswam perfected his bail conditions and had freedom, Oklobia has not been able to do so.

“My client was remanded on Monday.

“He was granted bail, but he has yet to perfect his bail conditions because one of the sureties we procured for him was rejected,” Oklobia’s counsel, Mr A.I Samson, told the court.

Samson therefore prayed the court for an adjournment to enable the defence to perfect his client’s bail conditions so that he would be free to attend trial.

The prosecuting counsel, Mr A.O Atolagbe, did not oppose the application for adjournment, but prayed the court to fix a day for the case before proceeding on vacation.

The judge, however, adjourned the matter until Sept. 28 since there was no free date in the court’s calendar before the vacation.

It would be recalled that Suswam and Oklobia are being jointly tried in two separate matters before two judges in the Federal High Court.