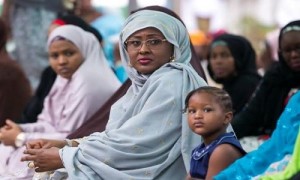 First Lady of Nigeria, Mrs Aisha Buhari, has expressed commitment to the service of  humanity, this was made in a statement by her Director, Information, Suleiman Haruna, in Abuja on Sunday, said Buhari made the commitment after she was presented with Woman of the Year award by Tell magazine in Lagos.

The programme was organised by Tell Communications Limited, Publishers of Tell Magazine.

The wife of the President, who was represented at the event by the Senior Special to the President Dr Hajo Sani, said came as recognition for the humanitarian activities of her NGO “Future Assured” programme.

She said the award signified the recognition of the activities of `Future Assured’ and a push for her to do more.

“I am convinced that this award will go along way by encouraging me to do more for the less privileged people in the society.

“As well as spreading the milk of human kindness, especially to those that are less privileged in the IDPs Camps across Nigeria,” she said.

The President, Tell Communications Limited, Mr. Nosa Igiebor, said the Tell family decided to recognise Buhari for her efforts in touching the lives of women and the girl-child through her NGO, Future Assured Initiative.

Igiebor said Buhari’s NGO played a vital role in total amelioration of the plight of the less privileged, especially in Northeast Nigeria.

He, however, said the purpose of the award was to inspire other Nigerians and inform them that the situation was not as hopeless as it might seem, as there could always be some silver-lining at the end of the dark corner.

Other awardees at the event included the Oni of Ife, who bagged the Man of the Year award, Bola Tinubu (National Icon of Democracy award) and Gov. Kashim Shettima of Borno and Prof. Ben Ayade of Cross River, (both recipients of Governor of the Year award).

Their awards were received by their families.

Speakers at the event harped on the need for national unity and called on Nigerians with separatist tendencies to abandon such tendencies and embrace peace.