Ondo State appears to have joined Lagos in suffering disturbing incidents of collapsed buildings which have claimed lives and properties. 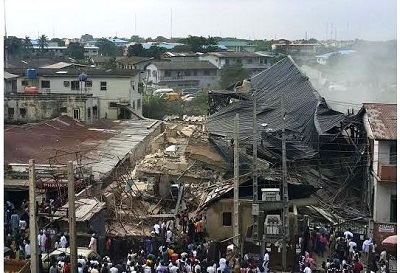 35-year-old man identified as Segun Ekun was reportedly killed in a collapsed building at Bolorunduro town, the headquarters of Ondo East Local Government Area of Ondo State.
According to the Public Relations Officer of the Ondo State Police Command, Mr. Femi Joseph, the incident occurred during a downpour on Thursday midnight in the town.
Joseph said there was no element of criminality in the incident, saying it was a natural occurrence that caused the death.
He said, “The deceased was Segun Ekun, 35-year-old, and his death was sudden and natural because it was a result of a collapsed building.”
Speaking on the incident, the wife of the deceased, Mrs. Sarah Johnson, explained that she was initially inside the room with her late husband on the fateful day but she went outside to fetch some rain water during the downpour.
Also, the younger brother of the deceased, David Johnson, stated that he was sleeping in one of the rooms in the house shortly after the downpour when he heard a loud sound from the direction of the room where his late brother was sleeping.
He said on getting to where his brother was sleeping, he saw that parts of the wall of the building had collapsed on the deceased.
According to him, it took the assistance of the neighbours before the lifeless body of his late brother could be evacuated from the debris of the building.
A Punch correspondent gathered that the remains of the deceased had been taken to his hometown for burial.