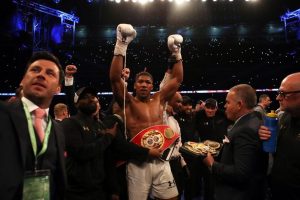 Joshua,  is set to face Klitschko for a second time after his thrilling victory at Wembley Stadium in London in April, with a number of venues being considered to stage the heavyweight world title fight.

Klitschko will meet manager Bernd Boente this week and is expected to agree another fight with Joshua, who holds the WBA and IBF titles.

Hearn told Sky Sports,  “I feel like it’s Wladimir Klitschko. People keep saying is there a deadline? The situation is the fight is happening unless we are told otherwise by Bernd Boente and Wladimir Klitschko, who have a meeting this week.

“So many offers this week – Nigeria, Dubai, America, and also we have the opportunity of Cardiff here in the UK.

“Financially, Cardiff’s not the best choice, but also at the same time, if it’s not broke don’t fix it, and we have that mentality with AJ  moving forward.

“Over the next two weeks we are going to look at all those opportunities and sift out the ones that are real and the ones that make sense, and look at where the fight will be. But in our minds moving forward, it’s Wladimir Klitschko next.”

Kubrat Pulev remains the mandatory challenger for Joshua’s IBF belt and Hearn expects a decision from the governing body this week about whether a rematch with Klitschko can take place first.

“I think we will get a full decision on that this week,” said Hearn. “We are confident that a fight of that magnitude, with the guarantee of course Pulev fighting next.

“We can’t fight Pulev, he’s not going to go away and we’re not looking to shirk that fight.