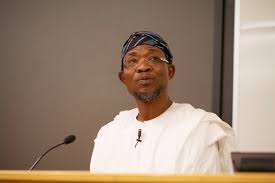 The Osun State Governor, Mr. Rauf Aregbesola, has blamed the management and workers of the Ladoke Akintola University of Technology, Ogbomoso, for the crisis rocking the institution, saying it is due to their lack of insincerity.

The governor, who said this in a statement issued on Sunday by his Commissioner for Information, Mr. Adelani Baderinwa, urged stakeholders and members of the public to prevail on the management and workers of the institution to be sincere and stop frustrating the efforts of the owner states in resolving the crisis.

The governor said the two owner states – Oyo and Osun – engaged the services of an audit firm, KPMG, to audit the university’s accounts but some ‘internal enemies’ in the institution were frustrating the audit.

He maintained that despite his and Governor Abiola Ajimobi’s resolve to bring a lasting solution to the institution’s crisis,  “some members of staff and management are sabotaging the owners’ efforts.”

The statement read partly, “It is worrisome and disturbing, especially in this recession time, to know that LAUTECH runs 97 bank accounts when the Treasury Single Account has become the order of the day. There are 10 Chief Accountants which is not so in other universities.

“More worrisome too is that LAUTECH has lost money in many distressed banks, according to the report of the visitation panel.”

The governor also said he was worried about the level of alleged mismanagement of funds at LAUTECH, saying the institution ought to be self-sufficient if its resources were well managed.

Aregbesola said it was surprising that while the Osun State University, which was nine years old and had a student population of 9000 and six campuses, could survive on its own, LAUTECH, which was older and had far higher number of students, could not.