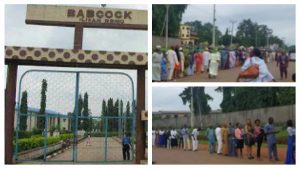 The graduation ceremony at Babcock University, Ilishan-Remo, Ogun state,on Sunday June 4,  witnessed the usual  blockage and serious traffic. As usual the whole community is usually affected on this day as people coming to attend the ceremony would experience traffic.
At times, the whole Ijebu-Ode express way and Sagamu would be blocked. Aside from the traffic outside the school premises, parents who got to the school early were made to queue up before they could gain access into the ceremonial ground.
According to the pictures which has gone viral on the internet, parents were seen on a long queue as they were trying to enter the stadium were the ceremony was taking place.