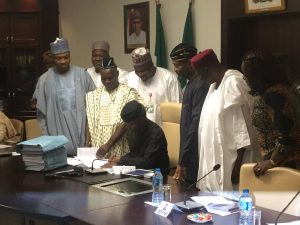 After so much delay in the signing of the 2017 Budget, the  acting President, Yemi Osinbajo, on Monday signed the 2017 Appropriation Bill into law.

The signature of the acting president was appended on the document at about 4:41pm inside the Presidential Villa, Abuja.

The brief event was witnessed by principal officers of the National Assembly, presidential aides and other top government officials.