Home News Feed Breaking News: Check Out How Nigeria Got Beaten By Cameroon In Uyo
Facebook
Twitter
WhatsApp
The Super Eagles have staged a rather weak performance compared to their South African rivals, losing by 2 goals to nil. 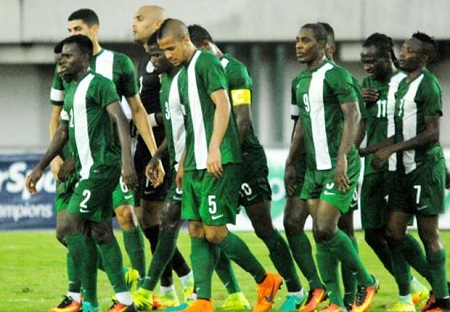 The Super Eagles on Saturday lost 0-2 to visiting Bafana Bafana of South Africa in the African Cup of Nations qualifier played at the Akwa Ibom Stadium, Uyo.
After a goalless first half, Rantie broke the deadlock at the 51st minute with a great header from inside the box when he connected with a decent cross by Mphahlele on the right-hand side.
Bafana Bafana increased the tally in the 81st minute through Percy Tau, who beat the offside trap, rounded the Nigerian goalkeeper before slotting into an open net.