Home News Feed Car Snatcher Lands In Trouble in Enugu State | Photo
Facebook
Twitter
WhatsApp
A deadly armed robber and car snatcher has been arrested by men of the Nigerian police during a stop and search operation. 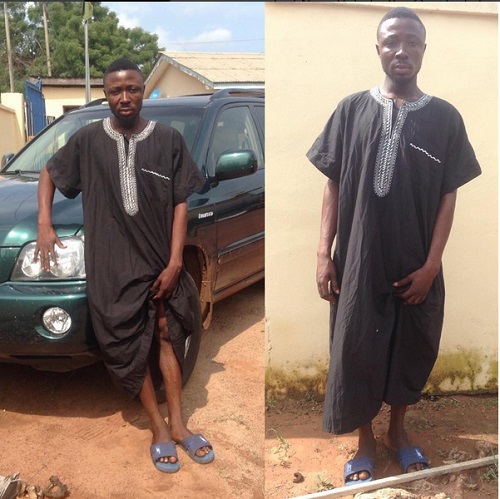 A notorious car snatching suspect/Armed Robbery identified as one Mike Solomon Aondo from Katsina Ala in Benue state has been nabbed at Local Government Area of Enugu state  along Otukpo/obolloafor road by the operatives of the safer highways of the Enugu state command on stop and search.
The incident took place on 18th June, 2017. The suspect is said to have participated in the robbery of a Toyota highlander jeep from the owner in his compound with his other members of the gang on gun point at High level quarters Markurdi on 18/6/17 by 3am and fled.
It was gathered that the suspect later dropped off some his gang members and started heading down towards Enugu before the operatives acting on the intelligence information nabbed him.
He is now helping the operatives of the command in their preliminary investigations in relation to his nefarious activities with his Gang members. Recovered from him is the robbed Toyota Highlander Jeep with Registration Number GBG 44AA Benue green in colour.