Home News Feed Checkout How Much Anthony Joshua’s Current Fortune Is
Facebook
Twitter
WhatsApp
The current fortune of highly celebrated boxer, Anthony Joshua, has been revealed and you will be surprised by it. 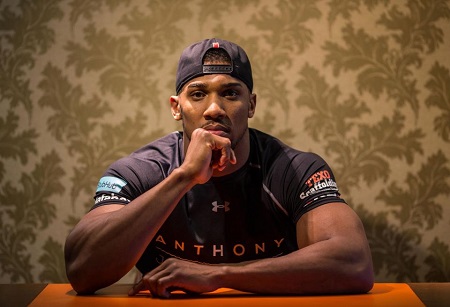 Anthony Joshua, the highly celebrated heavyweight boxer may have only had 19 fights, but he has already earned more money than most boxers can dream of.
Joshua, 27, previously expressed his ambition to become the first ever billionaire boxer, and he may just do that.
The Bermondsey brawler netted £6.5 million when he knocked out Wladimir Klitschko at Wembley Stadium.
And Joshua is now, according to Daily Star UK, thought to have amassed more than £15 million after series of amazing performances.
Promoter Eddie Hearn revealed that the Olympian could command a £50 million fee for every fight in the near future.
Despite his millions, Joshua recently moved back into his Mum’s former council flat, as he looks to stay grounded before his rematch with Klitschko.
But the Brit could be forced to pack his bags for a lengthy training trip if the fight is staged in one of the preferred venues.
Hearn is eyeing many locations round the world, and named Nigeria as one of the likely destinations.
He said: “I think Nigeria is probably one of the frontrunners.
“People have this perception that Nigeria is a place that makes fire by rubbing twigs together.
“It’s a very powerful economy with a huge middle-class sector and actually it’s a country that has a number of major events already – particularly pop music concerts.”