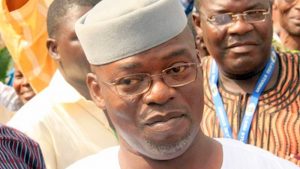 Former Ekiti State Governor,  Olusegun Oni, has indicated his intention to contest next year’s governorship election in the state.

Mr. Oni, who is the deputy national chairman (South) of the All Progressives Congress, APC, is expected to officially make an open declaration to run for governor in July.

His campaign director general, Ife Arowosoge, made the disclosure on Thursday at the maiden meeting of some APC leaders and members from all the 16 local government areas loyal to his ambition.

Mr. Arowosoge, a former House of Representatives member, said Mr. Oni had written letters of his intention to vie for governor in 2018 to the party executives at ward, local government and state levels.

He said Mr. Oni would commission the headquarters of his governorship campaign secretariat located along Opopogbooro, Iworoko Road on the day of his public declaration and also visit the APC state secretariat after which he would visit senatorial offices.

According to Mr. Arowosoge, Mr. Oni has been receiving “clarion calls” from interest groups like teachers, civil servants, local government workers, retirees, youth and women groups to take another shot at the governorship race given his “performance” while in office between 2007 and 2010.

He said Mr. Oni has the experience, exposure and pedigree to make a difference if given the chance to occupy the governor’s chair again.

“He is simple, plain-minded, intelligent, humble, respectful, incorruptible, responsible and God-fearing,” he sai

He said Mr. Oni during his administration provided employment for over 4,000 youth, gave autonomy to both legislature and judiciary, accorded traditional institution respect, gave good welfare package to civil servants and retirees, provided infrastructure and other social welfare programmes.

“This is the man we have chosen to work for; we are not ashamed to associate with this man of integrity and we must ensure that he wins both the primary and general election with landslide victory,” he declared.

“The political atmosphere is most favourable for our party now and the only person people are demanding of our party to give them is Chief Olusegun Oni who they are ready to vote in as governor, come 2018.”