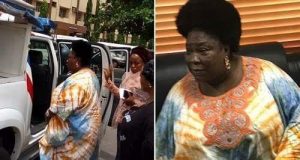 An Ebute Metta Magistrate Court has ordered the release of the woman identified as Mrs Taiwo Titilayo Momoh, a texile trader who attempted to commit suicide on  March 24, who was later rescued by a police patrol team rescued from jumping off the Third Mainland Bridge in Lagos.

Momoh was in a taxi heading towards Oworonshoki when she told the driver to stop on the bridge, due to financial problems.

The Police arrested and later arraigned her before an Ebute Metta Magistrate Court in Lagos. She was granted N500,000 bail after she pleaded not guilty to a charge of attempted suicide, and the presiding Magistrate, T. A. Elias ordered her to undergo psychiatric evaluation before her next court appearance on June 1

The Magistrate’s Court yesterday discharged her for offences bordering on attempted suicide, and it was revealed that the case was dismissed as recommended by the Directorate of Public Prosecutions.