Home News Feed Criminal Caught Procuring Fake Visas to Travel to the U.S | Photo
Facebook
Twitter
WhatsApp
A Nigerian woman who was desperate to travel out of the country by all means has been caught after procuring fake visas. 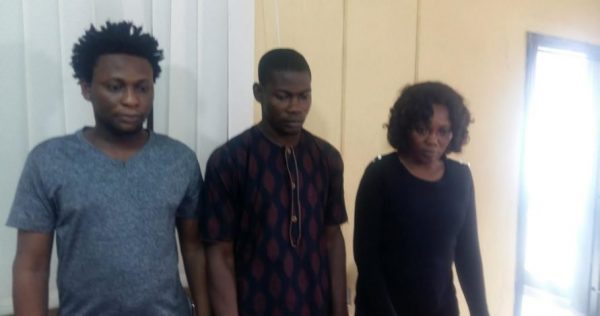 A 34-year-old woman, Modupeola Afolabi, has been arrested by operatives of the Police Special Fraud Unit (PSFU), Ikoyi, Lagos, for procuring fake United Kingdom and Chinese visas as well as fake Heathrow Airport’s entry/exit stamps, The Nation has reported.
Afolabi was paraded by the spokesman for SFU, Lawal Audu, an Assistant Superintendent of Police (ASP), alongside two suspected visa racketeers, Sesan Awolola, 31, and Adebayo Ajase, 28, who allegedly specialised in cloning visa payment slips and receipt.
While confessing before journalist, Afolabi who claimed to be a university graduate, told journalists that she resorted to procuring fake UK and Chinese visas after she was denied United States visa twice.
The woman said when she contacted a visa agent, she was told that her application was rejected her because she had a virgin passport.
Afolabi said: “The agent, Olawale told me there was something he would do so that when my documents are sent again, the U.S people will grant my visa request. He told me that the U.S Embassy doesn’t verify the authenticity of visas from other countries and so, I agreed to do it.
“I paid him N70,000 for the fake visas and stamps. I badly needed to travel to America to buy clothes for sale. I usually shopped online and I felt if I started travelling to America to buy, it would be cheaper for me.
“I have a registered business and I think I have enough money in my account but they rejected me twice. They found out when they were asking me questions during interview that I have not been to the UK and that was how I was arrested.”
According to Audu, the SFU received a petition from the U.S Embassy last year lamenting the amount of money it was losing to fraudsters, who use Corel Draw application and Microsoft Word to clone old receipts and present them for use by other visa applicants.
Following the petition, Audu said the SFU commenced an investigation which led to the arrest and arraignment of three suspects, including one Ismaila Adefile before a Lagos Magistrates’ Court, Igbosere.