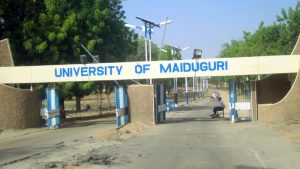 Borno State police commissioner, Damian Chukwu, told journalists at a press conference that most of the attackers were teenage girls who were wired with deadly explosives.

The CP said some 13 other persons were also injured as a result of the bomb attacks.

“The twin explosives killed eight people and injured 11 others in the buildings. But the third suicide bomber amongst the suspects only killed herself, by detonating the IED strapped to her body without hitting any target,” he said.

“The fourth female suicide bomber, identity not known, was arrested with injuries on her body but she eventually died same night (Sunday) as a result of injuries she sustained.”

He said another attack was also recorded in the early hours of the dawn when another set two female suicide bombers attacked yet another location within the precinct of the University f of Maiduguri.

“In another development at about 4.08am, to be precise, two female suicide bombers detonated their IEDs within the premises of University.

He said the police have mobilized its Explosives Ordnance Department to clear the attacked location and ensured that normalcy was restored.

The CP said the attackers may have been those prevented from gaining access to the Eid Prayer grounds as a result of security.

He said the police has since provided credible information to the military on where the Boko Haram insurgents manufacture and couple their explosives, and that an operation has been launched to fish out those behind such.