Home News Feed I Don’t Collect Ransom Below N10m – Billionaire Kidnapper, Evans Blasts Female...
Facebook
Twitter
WhatsApp
Billionaire kidnap kingpin, Chukwudumeje Onwuamadike, a.k.a. Evans, has dismissed a woman who came to Lagos State Police Command to claim that she was kidnapped by Evans, adding that she paid millions of Naira as ransom. 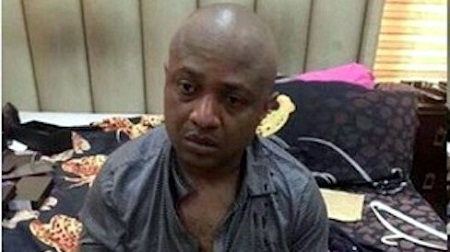 Some victims who claimed that they were kidnapped by Evans have appeared at the Lagos State Police Command, Ikeja, where they accosted the kidnap kingpin.
Evans also dismissed a female accuser, saying he does not kidnap women.
The kingpin also denied two of his alleged victims, who claimed to have paid N5 million and N10 million respectively.
Evans was reported to have told the two alleged victims that he does not collect such small amounts for ransom.
A man, who identified himself as Murphy Ajala, according to Vanguard, came along with claims that he was kidnapped by Evans but the kingpin denied abducting him.
Ajala, a hotel owner in Apapa, Lagos, accused Evans of kidnapping him in 2010 and demanding N10 million.
He told Evans that he abducted him at the entrance of his hotel after he returned from the Coronation of Ojota of Ijora and was taken in his Hummer SUV to a bush in Ajah.
The alleged victim, who claimed to be a British citizen, said Evans and his gang abandoned his SUV at Lekki, where it was later found.
When Evans came before Ajala, he looked at him and said bluntly; ‘’I didn’t kidnap you.’’
The kingpin demanded further, ‘’How much did you pay as ransom?’’ Ajala responded, “I paid N10million.”
Upon hearing that, Evans declared, ‘’I don’t collect N10million as ransom.’”
Evans also told another alleged victim, a middle-aged woman that “I don’t kidnap women.”
The woman also came screaming that Evans kidnapped her and collected the sum of N5million as ransom.
Evans reportedly looked at the woman and said, “Madam, I wasn’t the one who kidnapped you, and I don’t kidnap women.
“I also do not collect ransom as little as N5million. You may have to look elsewhere for the person that kidnapped you.”