The Economic and Financial Crimes Commission bid seeking to stop Ekiti State Governor, Ayodele Fayose, from operating his accounts with Zenith Bank has failed as the Court of Appeal, Ado Ekiti, on Tuesday dismissed the motion.

The court said the motion was lacking in merit and speculative because the anti-graft agency suppressed material facts in the matter.

Justice Taiwo Taiwo of the Federal High Court, Ado Ekiti, had on January 31 dismissed a similar motion for stay of execution filed by the commission against his judgment delivered on December 13, 2016.

The judge in the December judgement had ordered the EFCC to immediately unfreeze the accounts of the governor, saying the action of the EFCC was against due process and that the anti-graft agency did not follow the laid down regulations in freezing the governor’s accounts.

The EFCC had frozen the accounts after it allegedly traced N4.7bn out of the arms funds from the office of the National Security Adviser to the accounts.

Dissatisfied, the commission approached the appeal court for an injunction to restrain Fayose from operating the accounts, pending the determination of the appeal.

But dismissing the motion, Justice Fatima Akinbami in the judgement read on Tuesday said the EFCC did not attach the purported notice of appeal and the Federal High Court’s judgement which was the subject of its appeal.

The court also pointed out that the alleged damning intelligent report, which the EFCC claimed to have received concerning money purportedly paid into Fayose’s account by Senator Musiliu Obanikoro was not provided nor attached for the court to see.

The appeal court agreed with Fayose’s counsel, Chief Mike Ozekhome (SAN), that “Fayose, being a sitting governor conferred with immunity under Section 308 of the 1999 Constitution as admitted by the EFCC counsel, Rotimi Oyedepo, has not been shown to have neither been tried nor found guilty by any court of law such as to tag money in his bank accounts as proceeds of crime.”

The court described the EFCC’s claim on the receipt of an intelligent report concerning the money as mere speculation which could not be relied upon.

The appeal court also agreed with Ozekhome that the court could not restrict a completed act since the EFCC had admitted that N80m had already been withdrawn from the accounts.

“A complete act cannot be restrained. Only the court can determine whether the monies in question in the accounts frozen are proceeds of crime and with a valid order,” the court said. 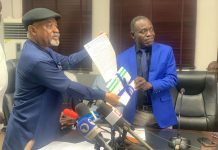