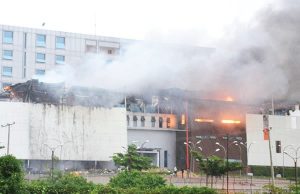 The fire incident occurred at about 2 pm on Sunday, June 25,  2017, at the facilities used as a branch of the Church in Abuja.

Responding to the circumstances that surrounded the unfortunate incident, Adefarasin in a series of tweets thanked God that there were no casualties and that the incident occurred in the afternoon after all those attending the mid-year Thanksgiving Service had departed the premises.

He said the church was committed to determining the root cause of the unfortunate incident.

Adefarasin further said the incident had not affected the church’s services as the mid-week service would continue as usual.

While some parts of the complex were damaged by the fire, the swift co-ordinated response by many including the following –

We commend the professionalism of all the first responders and thank them for the invaluable service they rendered.

We enjoin all our members, friends and guests to remain calm as we solicit your continued prayers in this season.