Home National News Odd News What! Gay dads are pregnant with their first biological child? (See photos)
Facebook
Twitter
WhatsApp
Two gay dads, who already have two adopted kids, are about to welcome their first biological child.  Biff Chaplow and Trystan Reese have expressed delight at experiencing what it’s like to create a child and watch it develop in the womb before welcoming it into the world. They did not have that with their first two so they are happy to experience this “normal” birth process, according to them. 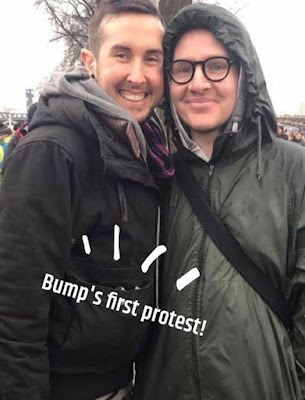 The couple, who live in Portland, Oregon, adopted Biff’s niece and nephew, Hailey and Riley, after Biff’s sister suffered substance abuse problems in 2011. Though they loved being parents to the 6 and 9-year-olds, they always longed to have a baby of their own, so Trystan, who is transgender, tried for a baby and he first managed to conceive in 2016 but they suffered a miscarriage at six weeks. 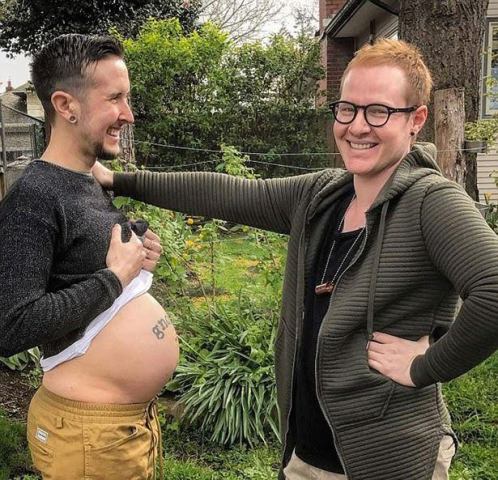 They wanted to wait a year before trying again but because of the medical complications of Trystan having to go off testosterone, they decided to continue right away. Luckily for them, Trystan has taken in again and they confirmed that he’s due to give birth this summer.  Trystan explained on their website why he wanted to become pregnant as a transgender person. He said he knew people were curious but were too afraid to ask.

He said that some people think “trans people were born into the wrong bodies, and we really hate our bodies, and that’s why we need to transition. For me, just transitioning normally – taking testosterone so that I have a beard and my voice is deep as it’s ever gonna get – and appear like a man… that’s enough for me. I never felt like I needed to change my body. And I for sure do not hate my body. I feel like my body is awesome, I feel like it’s a gift to have been born with the body that I did. So if you can start to understand that, then it starts to make more sense that it would not seem totally bizarre for me to want to create and carry a baby.”

Biff also revealed in a podcast that both him and Trystan had been very cautious in the early stages of the pregnancy. Trystan weighed himself “obsessively” and kept taking repeated pregnancy tests. Just before the six-week test, Trystan called the doctor to tell them he was a trans-dad and worried about what the experience would be like. Trystan also revealed in the podcast that he would feel people looking at his face for signs and remnants of womanhood because of his pregnancy.

The couple said they have stopped having those fears, which they noticed were unfounded. Their doctors are also very positive that everything will go well while the couple are expecting that the baby will be a boy and are already joking that it’s “diagnosis male”.