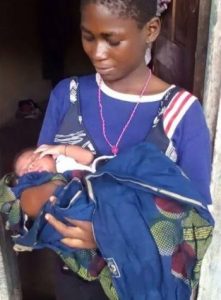 A teenager who has noplace to live but on a dumpster has given birth to a baby . According to Child’s Right and Rehabilitation Network (CRARN) a charity organization in Nigeria: “The girl’s only shelter is a dumpster at a dump side meant for collecting recycles, such as cans, aluminum, coppers and used plastic bottles.

They had a naming ceremony and the child was named Miracle.”