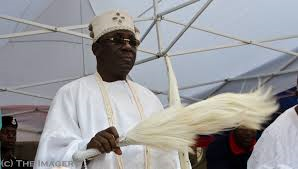 The Oba of Lagos, Rilwan Akiolu on Tuesday insisted before an Ikeja High Court that he remains the rightfully elected monarch of Lagos, he disclosed at the resumed hearing of a suit challenging his right to the throne as Oba of Lagos.

The News Agency of Nigeria (NAN) reports that on May 22, 2017 the last adjournment day which was a day to the 14-year anniversary of his coronation on May 23, 2003 as the Oba of Lagos, Akiolu, citing historical sources, had told the court that he is the bona fide monarch of the state.

Akiolu’s title is being challenged by Prince Adedoyin Adebiyi and Prince Rasheed Modile who are both of the Akinsemoyin Ruling House of Lagos.

NAN also recalls that Adebiyi and Modile were candidates chosen by the Akinsemoyin Ruling House to contest the Obaship title in 2003 after the demise of Oba Adeyinka Oyekan, the then Oba of Lagos in 2003.

They lost the race to Akiolu who they alleged had no rightful claim to the throne.

Joined in the suit as respondents are the state governor and the Attorney-General of Lagos State, Prince Awobade Pearse,

Others are the representative of the Ologun Kutere Ruling House and Chief J.J Junaid – Eko and the head of the traditional white cap chiefs of Lagos.

Other respondents include Prince Kola Balogun and Mr Musibau Kelani, who are the respectively the Head and Secretary of the Eshilokun Royal Family.

While being cross examined by Mr Babatunde Fashanu (SAN), Akiolu reasserted that the age-long traditional customs and traditions were followed in his selection as an oba.

Responding to claims that he was elected less than 90-days after the demise of Oyekan which is contrary to customs, Akiolu said that such a rule was non– existent.

“There have been 21 Obas of Lagos before the late Oba Oyekan, in the Lagos State selection of Obas, there is no 90-day rule.

“By the grace of God, I am a lawyer, I am duty bound to speak the truth, I have a duty to assist the court.

“The 90-day rule does not exist in the selection of Obas,”he said.

Akiolu disputed the claims of Adebiyi and Modile that he was not a descendant of Oba Ologun Kutere, a former Oba of Lagos who reigned from the late 1700s to the early 1800s.

“Oba Ologun Kutere had five children, one of which was Akiolu, Akintoye was the last child and Akiolu and Olusi were the older children.

“Akintoye was three months old when Oba Ologun Kutere died, I don’t know how old Akiolu was when his father died.

“By the grace of God, I am a direct descendant of Akiolu Ologun Kutere.”

When asked by Fashanu to state in order of seniority, the children of Oba Ologun Kutere, Akiolu retorted “I don’t know, I don’t work at the births and deaths registry.

“What is important is that Akiolu is the child of Ologun Kutere.

“There have been three members of the Akiolu family who ran for the Oba of Lagos including an Akiolu family member known as Baba Ita-Ado, I can’t remember when he ran and I cannot tell lies.

“All Lagos princes who have no curse placed on them are entitled to run for the kingship, it is however the prerogative of the king makers to choose who will be king.

“Many are called, few are chosen,” he said.

Akiolu noted that his being capped as Oba during his coronation ceremony by a representative of the Eleboro family was not illegal despite the fact that it was not presided over by Chief Eleboro, who personally caps Obas of Lagos.

“Contrary to claims that in the history of Lagos, no Oba has been capped by any person other than Chief Eleboro, Oba Adeniji Adele was capped by Chief Gafir.

Akiolu denied holding grudges against individuals who he allegedly disliked by preventing them from succeeding him as the monarch in future.

“The claimants had wanted to meet with me somewhere to sign a document regarding the succession but I refused.

“It is not an individual position; it belongs to the past, present and future.

“All human beings should not hate each other, we are equal in the eyes of God but not equal in our love for God,”Akiolu said.

Justice Adebowale Candide-Johnson adjourned the case until July 5, 6 and 11 for continuation of trial.