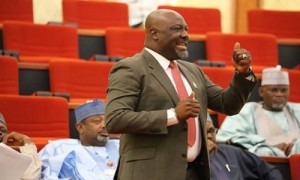 The Independent National Electoral Commission, INEC, says it will begin the process of recalling Senator Dino Melaye on July 3, 2017 as demanded by his senatorial district.

Six bags containing over 100,000 signatures requesting that Melaye be recalled as his people had lost confidence in him was submitted by the representatives of Kogi West Senatorial District had on Wednesday.

Melaye in response to his recall, laughed off the move, describing it as a hoax and a comedy of error.

INEC, in a statement said it held its regular weekly meeting on Thursday and considered the petition submitted by some registered voters from Kogi West Senatorial District to kick-start the process of recalling Senator Melaye.

“The next step is to verify that the petitioners are registered voters in the Kogi West Senatorial District.

“INEC will, on the 3rd of July, 2017 issue a public notice stating the day(s), time, location and other details for the verification exercise,” the statement said.