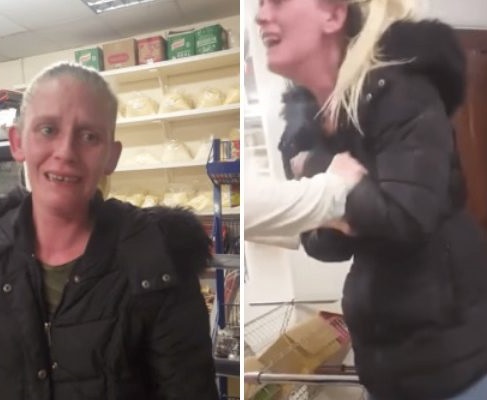 A new video showing an Irish woman who stormed into a Nigerian shop in Dublin, destroying its goods following accusations that the shop owner a Nigerian woman identified as Cynthia – connived with the Irish woman’s Nigerian partner to snatch her daughter, has emerged online.

Sources who shared the video, report that the Irish woman met the Nigerian man, Kelechi Jude, many years ago. Their relationship produced a daughter and Kelechi Jude quickly ensured that his name was inputted as the baby’s father at the Birth Certificate Registry office. This happened just days before his visa would expire so getting recognised as the father of an Irish child as well as spouse to an Irish woman would earn him more rights to stay in the country.

However, the relationship deteriorated. The Irish woman welcomed a second child who is autistic, and from her utterances, Kelechi connived with the shop owner, Cynthia, to whisk their daughter away, hence why the irate mum stormed the shop to exert some measure of revenge.

Cynthia called the police (Garda) on the irate mum and when they arrived, the Irish could not give any coherent explanation for her actions.

Nothing had been heard of Kelechi Jude as at press time. However, Cynthia reportedly did not press charges for the damages caused.