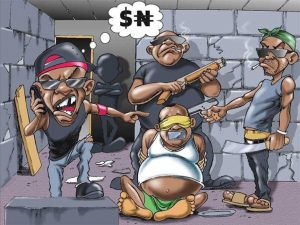 Gunmen who kidnapped a 27-year-old businessman, Alhaji Abubakar Kakirko from Kikirko Village in Sokoto State, have reduced the ransom they demanded from N500,000 to N200,000.

The state Commissioner of Police, Mr Mohammed Abdulkadir, who gave an update on the abduction to newsmen in Sokoto on Thursday, said that the abductors were in touch with Kakirko’s family.

”We believe that they are holding the victim in the vast, notorious Gundumi Forest on the Sokoto-Isa Highway.

” They are constantly changing SIM cards, but we are tracking them; we are monitoring them,” Abdulkadir said.

The News Agency of Nigeria (NAN) reports that the abductors seized the businessman in the early hours of June 16 in the presence of his wife and three children.

Also, the commissioner of police told journalists that the command arrested no fewer than 120 urchins at various black spots in Sokoto metropolis in the last two months.

”They were arrested in areas such as Iraqi, Kwanni and Runjin Sambo.

”The command seized dangerous weapons such as cutlasses and sharp and long knives from them.

” They have been charged to court and are remanded in prison custody.

Abdulkadir appealed to residents of the state to promptly report suspicious persons or movements to security agents to ensure peace and security.