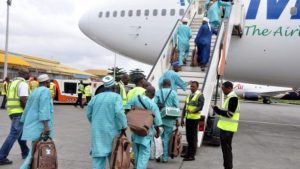 The Kwara Muslim Pilgrims Welfare Board on Sunday said it had fixed Friday, June 16, as deadline for the completion of payment of 2017 Hajj fare by all prospective pilgrims travelling through the board.

Mohammed Tunde-Jimoh, the Executive Secretary of the board, announced this while speaking with the News Agency of Nigeria in llorin.

He, therefore, advised all intending pilgrims to pay up their balance on or before that date, or forfeit their seats, warning that there would be no extension of the deadline.

Mr. Tunde-Jimoh said the fixing of the deadline was necessitated by the directive of the National Hajj Commission that all state Muslim pilgrims welfare boards should submit all travelling documents of their intending pilgrims.

The Secretary requested prospective pilgrims who had completed payment of the fare, to submit their e-passport to the Board before June 16.

He expressed gratitude to the state government for its support to the Board towards ensuring hitch-free preparations for the Hajj.

A total of 2,168 and 20 officials from the state are expected to perform the pilgrimage.

NAN reports that all intending pilgrims in the state had deposited N1 million, leaving a balance of N400,000.

The sum of N1.4 million is being charge as Hajj fare this year in Kwara.