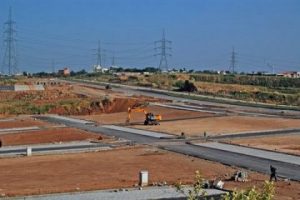 There was confusion in Abuja on Thursday between the Residents of Games Village Estate and the leader of the Lebanese community, Albert Alwan, for allegedly blocking the road to the estate with a container.

The Lebanese community was said to have claimed a portion of the estate on which they reportedly wanted to build a church, but the residents denied them access to the plot.

The Secretary of the Games Village Residents Association, Jude Uze, explained that they denied the Lebanese entry because they did not know them as bonafide members of the estate.

He said, “The Lebanese community said they have approval from the authorities to build a church inside the estate and we said no.

“We don’t have Lebanese community in the estate; who are those that will be attending the church, we don’t know. This morning they just came in and they brought in a container claiming that development control has given them the authority to start work.

“They said they have been given the order that if they were not allowed access into the estate that they should block the access road to estate. That’s the container you are seeing, blocking the estate.

A security officer in the estate, Mohammed Bala, said he was not sure of the content of the container, adding that Alwan refused to open it for inspection and scrutiny.

But  Alwan said he had the right to bring in the container into the estate for his project, adding that he had approvals from the Minister of the Federal Capital Territory, Mohammed Bello, and the development control department to carry out his church project within the estate.

He said he resorted to blocking the estate because he was denied access.

A senior police officer confirmed the incident, saying the issue was being investigated, adding that the residents had removed the container to a corner in the estate.

She said, “The Lebanese owned a land in the estate but the residents denied them access because they didn’t know them. Before our men arrived at the estate, the Lebanese men had disappeared and the residents had used a crane to remove the container. The police would investigate and find out the truth of the matter.”