Mr. Esau Ihemeje,a block moulder and farmer who hails from Ndiolumbe, Nvosi in Isiala Ngwa South Local Government of Abia State was attacked at his residence around 4am last month by some acclaimed vigilante members over alleged witchcraft.

According to reports,he was in front of his compound around 4:00am; one Chisom Agbara led some other men into his compound. He demanded to know why they came at that time to his place and they told him that they were vigilante members.

He asked them whether it was in his compound they were deployed to watch over that day. He told them that if there was anything like vigilante group that all members of the community should be made to be aware through a town crier.

According to him,it was not just one family (NWAGBARA FAMILY) that should form such a group in the community.They accused him of witchcraft activities and questioned why he should be out by 4am in front of his compound. 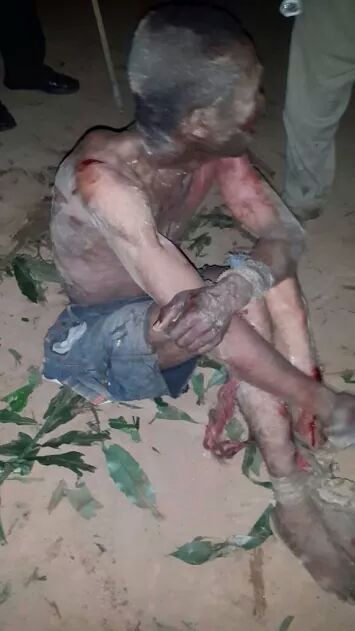 As they were still talking,one of them by name Monday Nwankpa held him and was assisted by Chijioke Igbodiegwu Agbara, Chisom Agbara, Ibe Agbara, Uchendu Agbara, Chisom Marcus Ihemeje. They carried him to another compound and threatened to deal with him.

They said it had been a long time they’ve wanted to get at him. As they carried him to the compound, they tied his hands and legs with robe, beat him with clubs and inflict injuries on him with machete.At a point, they wanted to use the machete to cut off his two legs, but God saved him but the deep cuts are still there on his both legs. (Pictures Attached)

As they were beating him and using the machete to inflict injuries on him, they said they will kill him because he is a witch. As they beat me, they took him to the village hall.Community women joined in beating him,calling him a witch and making jest of him. Before this incident, these people went to his farmlands and poured raw acid on his crops,killing all his vegetables and other aquatic lives,all in a bid to deal with me.

They took him back to his house, forced the door open and destroyed all his house hold properties and made away with his N580, 000.00 which is his savings. After destroying his properties, they made him unclad and carried him to his maternal home at Obingwa Local Government.

His maternal relations objected to the action of his people and insisted they should take him back to his home.According to them, what they did was an infringement of human rights.They argued that a married man is not supposed to be carried back to his maternal home in that manner and assaulted for no reason without the consent of the traditional ruler . 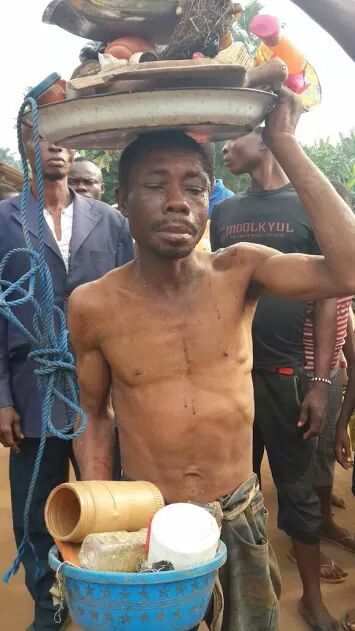 When he went back to his community, the guys used machete to pursue him around, insisting they will kill and eat his meat and nobody will come for him.

The people that did this to him are family members of Agbara as alleged by the victim.Prior to this, they used the front of his compound as dump site.

When he complained, they said he should give them N20, 000 with drinks which he did.He said he had not reported to the traditional ruler of the community HRH (Eze) Godwin Ogbonna because the people had not allowed him to return to their community.

Before taking him out of the community, they wrote things he should buy before he can return to the village. These include giving them 9 cartons of beer, 9 crates of malt, 9 cartons of Legend beer, 3 bottles of hot drinks, 3 jars of palm wine, 36 pieces of cola nut, 36 alligator pepper and a fine of N20, 000. They forced him to sign an agreement.

An NGO by named Foundation For Environmental Rights, Advocacy & Development(FENRAD) has petitioned the Inspector General of Police for an attempted murder of the victim.The NGO urged the IGP to arrest and prosecute Chijioke Igbodiegwu,Agbara Ibe,Monday Nwankpa and Chisom Agara who were involved in the heinous crime.