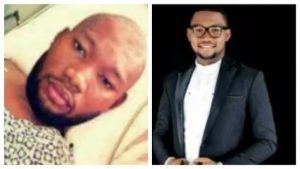 The was a bit of confusion in Indian  as a Nigerian man who was declared dead by medical doctors in Australia resurrected in India. The man who was identified as John Samuel was said to have suffered from a heart related ailment which led to his death on Wednesday, June 13, by 4pm in Australia but on Thursday, June 14, the young man was said to have resurrected around 8am in India. According to Purity who took to the social media to share the testimony of how it all happened:
“This young man here #John Samuel is a product of testimony He died and resurrected having heart abnormality doctors confirmed him dead but God gave him a second chance. No Lack, No Loss, No Limitations. His name is John Samuel, his my Facebook friend, according to his close friends, he died 13 June, people were saying rest in peace, family were mourning him, I was like y must this young blood die, even though I don’t know what he was suffering from but 14th June he woke up, God gave him a second chance, God raised him, he showed him mercy, I call him d God of d eleventh hour, d God of d helpless and hopeless. I know diz will really shock devil.
John Samuel died June 13 4pm in Australia and woke up June 14 by 8 am in India, where he went for a heart transplant. After so many heart failures and pains but surgeons and doctors in India could not help saying it is too risky for them to try they had to go to Australia immediately were a doctor said his chances of survival was 20% ….Look what prayer Can Do.. Families and Friends prayed him back to life……miracles happen I mean miracles happen….bringing him to Nigeria as a corpse was revised…because he never left us as one, he woke up on his way to Nigeria in India….and said ‘take me home’…..all what you read and the pictures are very true..
Isaiah 53:5 says that by your stripes we are healed, Jesus I believe your words, john Samuel you are healed because the master has carried away your infirmities and diseases, God wishes above all things that we will prosper and be in good health, therefore by these words, divine healing and health are your portion in Jesus name we shall live to declare the word #chineke Emela.”
Source: ( Gossip.Naij.com)