According to reports, an unidentified man has been murdered and burnt to death in Kaura, after he was reportedly abducted. 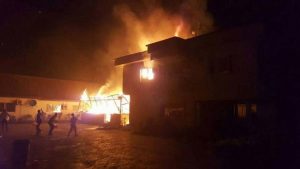 The incident which occurred last Wednesday was said to have taken place along Kauyen-Bugau Road behind NITEL office.

Northern City News gathered on Sunday that some men who witnessed the incident went to get help, but the victim had died before security personnel arrived at the scene.

A source said, “The security officials took away the remains of the victim to the Criminal Investigation Department at the state police command headquarters.

“It was believed that the victim was abducted from Kano and taken to the NITEL office where he was killed.”

The police could not be reached for comment as the Kano State Police Public Relations Officer, Magaji Maijiya, did not respond to calls to his phone.