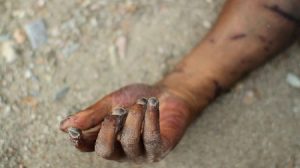 The body of a missing five-year-old girl was discovered in Cape Town over the weekend, this was made known by the Western Cape Provincial Department of Social Development.

The child, who is from Strand in Cape Town, went missing on Saturday, but her body was found the following day, with her eyes gouged out.

The social department added that her death was reminiscent of another recent case of the murder of 33-year-old Unathi Booi.

Unathi’s body was also found, with the eyes gouged out in Langa, Cape Town.

Also in Cape Town in May, the body of a three-year-old girl was found in an open field.

The girl was believed to have been raped and killed by a man who lived with her family as a tenant for two years.

This followed separate gruesome killings of women and children in some parts of South Africa recently.

“Violence against women and children is completely unacceptable. This cannot be the new norm,” said Albert Fritz, Social Development Minister in the Western Cape.

Fritz appealed to the South African Police Service to conduct a thorough investigation, and to make arrests as soon as possible.

He also appealed to members of the community with any information that can assist.

Over the past two months, almost 20 female killings have taken place in South Africa, shocking the nation that has already been plagued by rampant crimes.

On several occasions, President Jacob Zuma has urged the nation to unite against the killing and attacks on women and children.

South Africa has among the highest rates in the world for the rape and murder of women.

According to the South African Medical Research Council, 56 per cent of female killings are committed by intimate partners.

The government has declared violence against women and children as a priority crime and set up a 24-hour Gender Based Violence Command Centre hotline intended for victims to report attacks, including those by family members or partners.