According to the Burial Committee of Moji Olaiya, the children of late actress, have reportedly been offered scholarship by friends of their mother and other well-wishers. 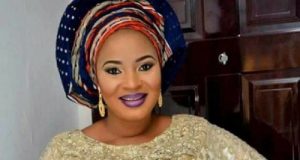 This was revealed to Sunday Scoop by a member of the committee set up to handle the deceased’s burial, Foluke Daramola-Salako. She said, “So far, some of the people that we got in touch with concerning the burial have promised to offer Moji’s children scholarships. As a committee, we are trying as much as possible to liaise with this people. We are also planning to have a fixed deposit account for the baby, Mariam. By the time she is around 10 years old, if there is a need to turn it over to her for her schooling and other things, we would do that or carry out an insurance plan for her. We also plan to have a trust fund for her or endow a foundation on her behalf. We have a lot of plans and as time goes on, things would be clearer. We might also institute a business for Moji’s aged mother through which she can get funds, no matter how little, to take care of the kids. Because of her age, it has to be something that wouldn’t be too strenuous. Mariam and Adun will be staying with their grandmother.”

Another member of the committee, Yomi Fabiyi, also confirmed that several people have pledged their support for the family. He urged well-meaning individuals to render any support they could. Responding to the claim that actors have not contributed much financially, he said, “It is not binding on any actor to pay money but it is the morally right thing to do. Naturally, one would expect that some of our colleagues that have been visiting the family would have done some things in their capacity. I’m also aware that our colleagues in US, UK and other countries came together to offer some prayers for the deceased and they would likely make some contributions to her family.”

Denying that the committee sold shirts for the burial, Fabiyi said, “We never sold any shirts and we’ve said it time and again. It was her friends that decided to make shirts and sell it. They just asked us to advertise it for them and we did. Meanwhile, that shirt was sort of a celebration for Moji and I don’t know why there was so much uproar about it. Should people have worn Ankara?

When you want to make things uniform and do it in a solemn way, shirts are the best way to do it. For the shirts that the committee members wore, it was Faithia Balogun that offered to pay for it all and she didn’t collect any dime from anybody.”