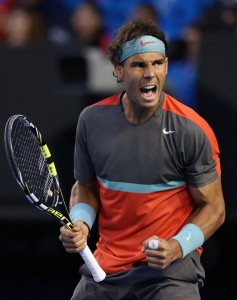 Rafael Nadal defeated Dominic Thiem in straight sets  3-6 4-6 0-6 on Friday in the French Open Semi Finals to set up a final match against Stan Wawrinka on Sunday.

But, when faced with nine-time champion Nadal — who has only lost twice at Roland Garros — the challenge proved too much.

Thiem broke his opponent’s serve in the first game of the match before Nadal repeated the trick in the following game.

The Austrian let four more break-point opportunities slip in a tight opening set but from that point Nadal dominated.

The Spaniard went on to complete victory in two hours and seven minutes.

“I was starting a little bit more nervous today than normal, but then I played well, I think,” said Nadal.

“It’s true that Dominic played with more mistakes than usual.”

Asked about the prospect of a 10th title, he said: “I think I don’t make more history, it’s enough. Nine are more than good.

“Another thing is today is not the moment to think about that. It’s the moment I have to be very happy.”

Nadal now meets Stan Wawrinka in the final, after the Swiss beat world number one Andy Murray after five sets.