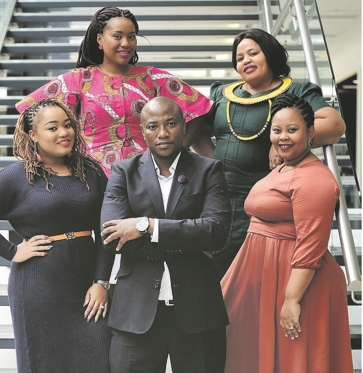 A prominent businessman and polygamist, has urged men to emulate him as he launches a new reality show with his four wives while making polygamy looks so fashionable.

A 43-year-old prominent South African businessman from Port Shepstone, identified as Musa Mseleku has made polygamy fashionable, after he opened his many houses to the public in a reality show called “Uthando Nes’thembu”, which means “Love and Polygamy”.
According to Daily Sun SA, within minutes of airing five weeks ago, Twitter went into a frenzy, and on Tuesday, Musa and his wives were at the Multichoice offices in Randburg, northern Joburg, to meet the people who work behind the scenes of their reality show.
While speaking to a correspondent, he said his four wives – Busisiwe MaCele, Nokukhanya MaYeni, Thobile Mseleku and Mbali MaNgwabe are happy to be married to him, adding that although some people have criticised him, he wanted to change people’s perceptions of polygamy.
“I want to show men that you can be in a polygamous relationship and also be considerate. My wives impose restrictions on me. I have to be home an hour earlier than them so I can prepare to spend time with all of them,” he said.
His wives have nothing but love and praise for him. Thobile said: “I knew what I was getting into and didn’t have a problem with it. I also come from a polygamous family,” she said, adding that the other wives are like sisters to her and they all rely on each other for advice and help.
Advertisement