Home News Feed Read What Nigerians Said About Buhari’s Two Years in Aso Rock
Facebook
Twitter
WhatsApp
President Muhammadu Buhari, who is away on a medical trip in London, is two years in office this week, but how has he managed the economy, secured the country, and governed Nigeria? Here’s what Nigerians have to say about it. 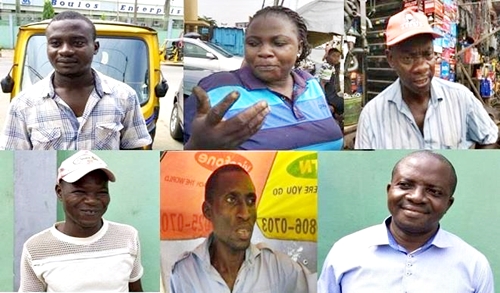 Seyi Aliu (a Lagos-based vendor)
“If we are talking about Buhari’s administration, to me what Buhari is doing is okay. As he said, he was coming to fight corruption and right now, we can see the way the anti-corruption is going. I like Buhari for what he is doing. To rate him, I’ll give him 80 percent”.
“Actually, according to the price of everything (in market) as the situation is now, what I would like to tell people is: just bear it, it’s only a matter of time.
Aliu Abdullahi (a transporter from Kogi state)
“To my own, what they did is quite okay, everything is moving amicably. There used to be armed robber everywhere but now everywhere is full of security men and I love that. The only thing there is just the increase in prices of goods. If it continues this way, the sufferings will be much but only God can control things.”
“Also, the issue of insurgency in the country has been limited as the government is trying to combat the militants”.
Felix Iheme (from Imo State)
“APC government is nothing to write home about. We can see Nigerians’ faces all over the road, everybody is crying. We are talking about recession; we don’t know how long it will keep Nigeria at ransom; Government sectors are changing workers, Private sector are changing workers; even the banks themselves are changing workers and now using casual workers. In the history of Nigeria, we’ve not seen or heard of such.
“We are highly disappointed in this government as far as I am concerned because what they promised us before they entered Aso Rock is not what we are seeing; what we are seeing now is magic. So they need to come back to the drawing board and look back to solve the problems of Nigeria, and not going to the media houses advertising themselves”.
Olatunbosun Damisi (a Lagos resident)
“There is nothing to say about the federal (government) because this situation is affecting the state governments, local governments and even individuals. So at the federal government level, based on the economy, there is nothing to write about. I can only rate them 10 percent”.
Ikechukwu James (an IT gadgets’ trader)
“In my own point of view, I don’t believe in the APC-led administration as an Ibo man because I knew it would be like this. If you watch out during the time of Jonathan, things were not as hard as it is now. Although I used to believe in Buhari; but to my greatest surprise, everything ceased because what he is after only is fighting corruption while people are suffering.
“On the funds recovered from an Ikoyi house, it’s supposed to be circulated so that the masses could benefit from it. Just look at the issue of the closed borders too; I used to buy a bag of rice at N7,000 but now, it’s being sold for about N20,000.
“Although we voted them for change and as a Nigerian, I believe that change should be functioning. Formerly, I used to make huge amount of money but now, it is not so”.
Mrs. Ilemobade Modupe (Trader)
“What I can say is that Buhari is not doing good in this administration; because since he entered government, everything changed. Before, I take little amount of money to buy some things and it would be okay but not this time again”.
“I can’t say the administration hasn’t done well because if it were to be another person, things might get worse than it is now”.
Mr. E.N Ojukwu (a Lagos-based spare-parts dealer)
“Let me start with the situation of a poor man on the street. As of today, there are lots of poor men in the streets because things are becoming too hard and there’s no money in the country. Though there may be money because I learnt the government retrieved huge amount of money from one Ikoyi house and other places in Nigeria.
“Generally, in this country, things are too expensive; no food, no light, no water. As citizens of this country, we find it difficult to eat twice a day. Since three weeks now, there has not been light in my vicinity, whereas, we have the right to have all these. More so, the politicians don’t know that the masses are suffering”.