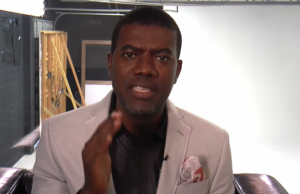 Omokri stated, “In a country, whose official language is English, President Muhammadu Buhari broadcasts his Sallah message in Hausa! Would Trump (whose origin is German) address America in German? So what about all those Nigerians who can’t speak Hausa?

“Ideally, the President should have spoken in English first; then, if he feels like it, he may also speak in Hausa. The way he spoke only in Hausa makes it seem as if he is only concerned with those who gave him 97 per cent of the votes while those who gave him five per cent can take a hike!

“How would the rest of the country have felt if President Olusegun Obasanjo had released a Christmas broadcast to Nigerians in Yoruba or if President Goodluck Jonathan had done so in Ogbia?

“How can a national leader address Nigerians in a sectional language? Nigeria has never had a leader as divisive as Buhari! There is no difference between President Buhari and Nnamdi Kanu.